There is no better way to celebrate fall than with these piece-of-cake pumpkin cupcakes and fluffy cream cheese frosting. They’re super easy, and always a crowd pleaser. The recipe is below, but before I get there, wanted to share a quote with you that I’ve been thinking about.

“The only thing standing between you and your dreams is … reluctance.” –Carroll Bryant

I like this quote, but it’s really easy to hate. It’s one of those inspirational “get up and do it” quotes that sounds like it should be on a poster somewhere in a middle school with a rainbow and a cloud. But…

Last year, my husband started listening to and acting like the people who just do it. He started his own web and integrated marketing business – one month before our first baby was born – because his dream was to be able to work from anywhere at any time. And it feels like he’s getting there.

I’ve got dreams too. I want to travel, to see other cultures, to learn another language, to take a baking class – but I haven’t done those things. It’s not the right time, it would be really hard, we don’t have the money. Logically, I know those are excuses – but it FEELS like they’re very real.

There are a lot of really successful people in the world, and my theory is that they’re the same ones who read that quote and think, “okay.” Maybe there’s not any magic to it. You just do the work. 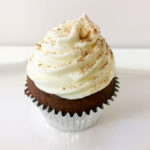 Sprinkle cinnamon over the tops just after frosting for some added spice and aesthetic.

What’s on the menu?